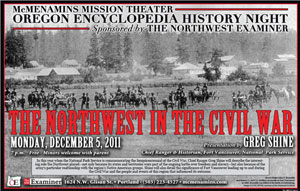 The Oregon Encyclopedia invites the public to the Mission Theater (1624 NW Glisan) this Monday, December 5, 2011 for the latest installment of History Night: The Pacific Northwest & The American Civil War.

Fort Vancouver was an important base of operations for the U.S. Army just prior to the Civil War. Captain Ulysses S. Grant arrived in 1852 to facilitate the settlement of the Northwest by establishing posts, building roads, and outfitting surveying expeditions. When war broke out, he and the other professional soldiers stationed at the Fort were sent east, and their positions were filled by hundreds of volunteers. Their Civil War task: to control the Native populations and secure the land for the Union and its sympathizers. The Northwest played an interesting role in the Civil War—not only because its states and territories were part of the ongoing battle over freedom and slavery—but also because of the army’s particular relationship with the region’s Native American groups. Chief Ranger Greg Shine describes the Civil War period in the Northwest, the significant people and events that influenced the outcome, and the role memory plays in our understanding of the Civil War, 150 years after the first shot.

The presenter is Greg Shine, Chief Ranger and Historian at Fort Vancouver.

This history pub is free and open to the public. Doors open at 6pm, presentation begins at 7pm.