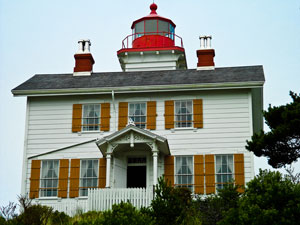 The Yaquina Bay Lighthouse on the bay in Newport, Oregon was built in 1871 and decommissioned only three years later. But on December 7, 1996, it was re-lit as a privately maintained aid to navigation.

The light shines with a steady white light from dusk to dawn (and sometimes on dark days, because it is controlled by a photocell.) The light is 161 feet above sea level.

The lighthouse had originally been active only three years due to the construction of the Yaquina Head Light, three miles north, which made it obsolete.