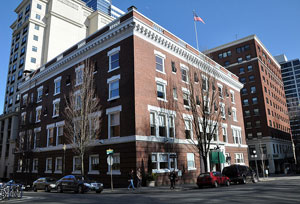 Portland’s exclusive Arlington Club was founded on December 9, 1867 by thirty-five businessmen who agreed to found a club where they could fraternize for mutual enjoyment and relaxation, and to provide a meeting place for discussing their own and Portland’s destiny. Translation: no women or Jews allowed.

The Arlington Club wouldn’t admit jews until the late 1960s after federal judge Gus Solomon criticized the exclusion rules. And not until 1990 did the club permit women to join.