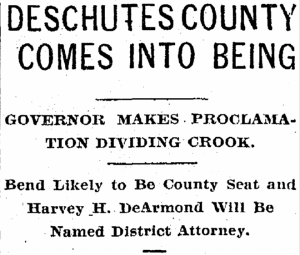 SALEM, Dec. 13. – (Special.) – Oregon now has 36 counties. Upon his return from Portland tonight Governor Withycombe signed the proclamation declaring that Deschutes County is a political entity of the state, and is no longer a portion of Crook county.

Created from the western portion of Crook County, Deschutes County was named after the river which flows through it. Early fur traders referred to the river as the the Riviere des Chutes, which means River of the Falls.