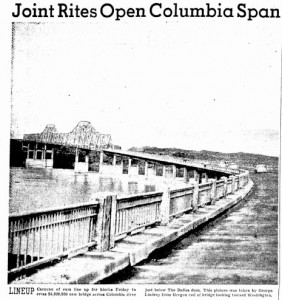 THE DALLES (Special) – Traffic in a steady stream was flowing across the newest Columbia river interstate bridge at The Dalles, opened for public use at noon Friday by the governors of Oregon and Washington, as thousands of motorists tried out Wasco county’s $4,000,000 structure located a stone’s through downstream from the are where a huge Columbia river dam is now rising.

The steel truss cantilever bridge carries U.S. 197, connecting Murdock and Dallesport on the Washington side with The Dalles. Less than four years later the completion of The Dalles Dam nearby inundated Celilo Falls.