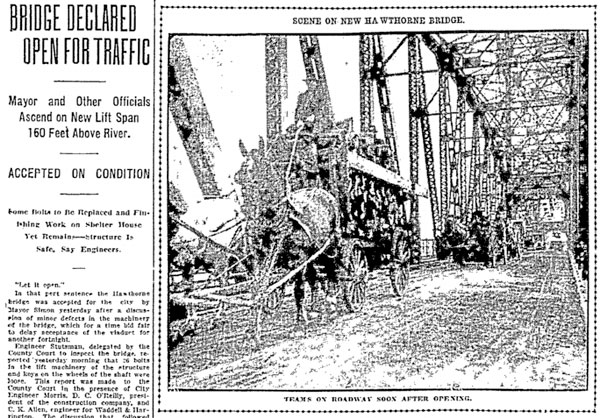 In that pert sentence the Hawthorne bridge was accepted for the city by Mayor Simon yesterday after a discussion of minor defects in the machinery of the bridge, which for a time bid fair to delay acceptance of the viaduct for another fortnight. . .

The Mayor, other officials and bridgemen ascended on the lift 160 feet over the level of the river. Engineer Hicks, who will operate the lift for the county, handling the levers. The bridge was then officially accepted, Mayor Simon saying to Engineer Stutsman:

“I now turn this bridge over to you, Mr. Stutsman. You are now in full charge. The bridge is open to traffic.”

The 1,383 foot long Hawthorne Bridge is the oldest vertical lift bridge still operating in the country, and one of Portland’s busiest bridges. 30,000 cars and trucks, and thousands of pedestrians and cyclists cross it each day. Lifts are required approximately 200 times a month. It was designed by the engineering firm Waddell and Harrington and was constructed by the Pennsylvania Steel Co, United Engineering and Construction, and Robert Wakefield.