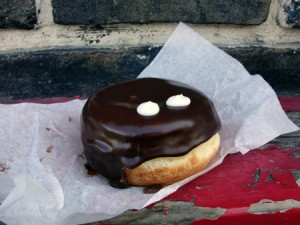 At the last city council meeting presided over by Portland Mayor Tom Potter, a resolution was passed declaring Voodoo Doughnut‘s Portland Creme the official doughnut of the city (The Oregonian, 25 December 2008).

At the city council meeting, Tres Shannon, co-owner of Voodoo Doughnuts, explained: “We wanted to come up with something that represented Portland . . . Take that, Boston.”