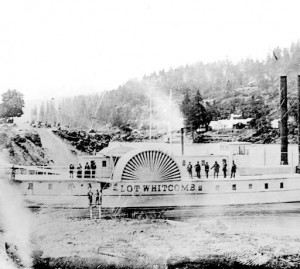 The first steamboat built to ply on the Willamette River, the side-wheeler Lot Whitcomb, was launched at Milwaukie on December 25, 1850 (Morning Oregonian, 25 December 1888). She was named for her principal owner, Lot Whitcomb, who was also founder of Milwaukie.

Designed along the lines of Hudson River boats, she was 160 feet long with 18 feet diameter side wheels. She operated on both the Willamette and Columbia Rivers between Milwaukie and Astoria until 1854, when she was renamed the Annie Abernethy and transferred to California to ply the Sacramento River.

Lot Whitcomb’s captain was John C. Ainsworth, and Jacob Kamm was the engineer.