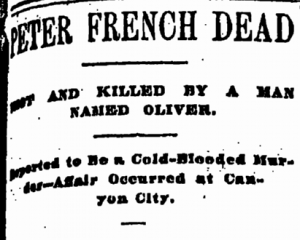 The Morning Oregonian published the following article two days after the shooting.

BAKER CITY, Or., Dec. 27. – A telephone passage to the Democrat from Canyon City says Peter French, a prominent cattlman and landowner of Harney county, was killed by a man named Oliver. It is reported that the deed was a cold-blooded murder. The victim was shot in the back of the head, the bullet coming out between the eyes. A land dispute is said to have been the couse of the trouble.

Oliver was indicted for murder, but just before the trial, which took place on May 19, 1898, the charge was reduced to manslaughter (Morning Oregonian, 7 June 1898). Sixteen witnesses were called by the state and nineteen by the defendant, who pleaded self-defense. The jury began deliberating the case at 4pm on May 28, and three hours later returned a verdict of not guilty.