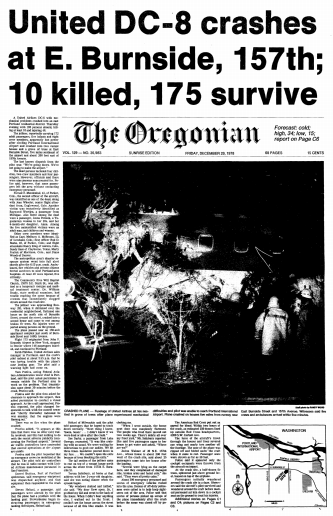 Originating at John F. Kennedy Airport in New York, United Airlines Flight 173 stopped in Denver, and continued to Portland on Thursday, December 28, 1978. The pilot reported a problem with the plane’s nose landing gear to the Portland tower, and, according to the National Transportation Safety Board report (pdf), failed to monitor properly the aircraft’s fuel state and to properly respond to the low fuel state. The DC-8 ran out of gas and crashed in Northeast Portland at about 6:15pm.

The last known dispatch from the pilot was: “We’re going down. We’re not going to make the airport.”