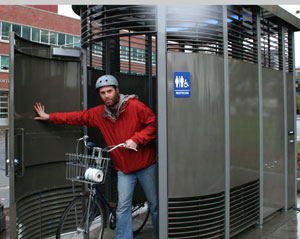 [H]ow did these sleek compartments of metal and plastic, which may smell slightly of urine, become a cult hit among Portland’s bathroom aficionados?

Simple: They’re not as crappy as other cities’ toilets.

Read the rest: Why Portland’s Public Toilets Succeeded Where Others Failed.

The post lauds the popularity and virtues of the Portland Loo, and examines various ways the public toilets of other cities, in particular San Francisco and Seattle, suck.

Currently there are four loos, with the fifth’s first flush scheduled for next Tuesday, January 31st. The first Portland Loo, located at NW 5th and Davis, debuted on December 8, 2008.

On World Toilet Day in 2010, the third Portland Loo, at SW Naito & Ash, was unveiled before a crowd of dignitaries and fans. Local filmmaker and blogger Mike Vogel was there. He filed a report on his quest to be the first person to pee in the brand new loo.

That’s Mike in the photo above, after his successful flush that day. The same photo is featured at the top of the Atlantic Cities post.