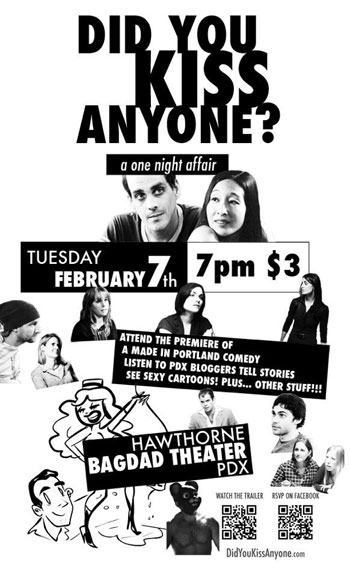 The Portland premiere of local filmmaker Mike Vogel‘s latest film, Did You Kiss Anyone?, takes place Tuesday, February 7, 2012 (exactly one week before Valentine’s Day) at the Bagdad Theater (3702 SE Hawthorne).

Heather and I are excited to attend this no doubt fantastic event. We had the pleasure and honor of helping out with and witnessing some of the making of the film, and we got to be extras in one of the bar scenes. Oh, and Heather is going to be up on stage at the premiere (details below) – she needs lots of attention.

“Did You Kiss Anyone?” is a made-in-Portland comedy about a married couple who agree to a one night affair which ends up being the most chaotic night of their lives. The premiere will include bloggers telling stories, actors reading audience submitted Kiss-Off messages, and more.

Doors open at 6pm, with the Kiss-Off messages commencing.

At 7pm Portland bloggers William Reagan and Heather Goguen [my lovely wife!] will tell stories on stage. Bill will share Prom is a Four Letter Word and Heather will explain How to Marry Your Internet Stalker [ahem, I was not a stalker – she’s taken creative license with this story].

The film begin at 7:30pm, followed by a Q&A with the actors and filmmakers.

Admission is a mere $3! You can RSVP on Facebook, or save the date on Google Calendar.

For trailers and more on the making of the film and cast, visit DidYouKissAnyone.com.