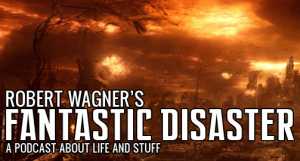 Robert Wagner is back. Well, he didn’t really go anywhere, but he’s launching a new podcast called Robert Wagner’s Fantastic Disaster a podcast about life and stuff, on Wednesday, February 1, 2012.

For now, to access the live stream of the debut episode, you have to act fast:

A podcast wouldn’t be any fun without a live stream.

That’s precisely why we’re inviting the first 100 people to fill out the form below and join us live at 12pm Pacific on Wednesday, February 1st, 2012 for the debut of “Fantastic Disaster”, the most awful podcast yet from the moron behind such forgettable works as “Portland Sucks”, “Cascadia.fm”, and probably a few other things that would be listed between quotation marks.

Sign up at FantasticDisaster.com, and look for it on iTunes soon. Robert announced on Twitter that Sabrina Miller will also be making an appearance. Live podcast starts at noon!