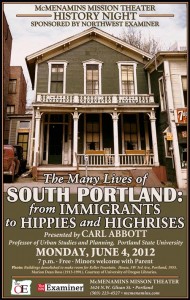 The Oregon Encyclopedia, in conjunction with McMenamins and the Northwest Examiner, presents The Many Lives of South Portland: From Immigrants to Hippies and Highrisers on Monday, June 4, 2012 at the Mission Theater (1624 NW Glisan).

In 1955, a Mayor’s Advisory Committee identified the blocks at the southeast end of downtown Portland—bounded by Market, Front, Arthur, and Fourth—as suitable for a land clearance and redevelopment project. Civic leaders wanted to use new federal legislation that had expanded the Housing Act of 1949 to include what soon became known as “urban renewal.”

This area, later extended to include twenty-six acres between Market and Jefferson, was known as the South Portland/South Auditorium Urban Renewal Project. Hundreds of residents and small businesses were displaced during the project over the years, radically transforming the neighborhood and downtown.

The presenter is Carl Abott, Professor of Urban Studies and Planning at Portland State University, and author of the book Portland: Planning, Politics, and Growth in a Twentieth Century City.

Admission is free to this, and all the OE History Night events. Children are welcome if accompanied by a parent or guardian. Doors open at 6 p.m., presentation starts at 7 p.m.