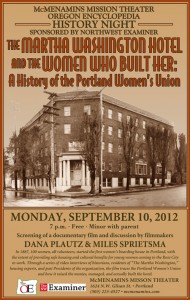 The Oregon Encyclopedia, in conjunction with McMenamins and the Northwest Examiner, presents The Martha Washington Hotel & The Women Who Built Her: A History of the Portland Women’s Union, a screening of a documentary film and discussion by filmmakers Dana Plautz and Miles Sprietsma, on Monday, May 7, 2012 at the Mission Theater (1624 NW Glisan).

In 1887, 100 women, all volunteers, started the first women’s boarding house in Portland, with the intent of providing safe housing and cultural benefits for young women coming to the Rose City to work. Through a series of video interviews of historians, residents of “The Martha Washington,” housing experts, and past presidents of the organization, the film traces the Portland Women’s Union and how it raised the monies, managed and actually built the hotel.

Admission is free to this, and all the OE History Night events. Children are welcome if accompanied by a parent or guardian. Doors open at 6 p.m., show starts at 7 p.m.