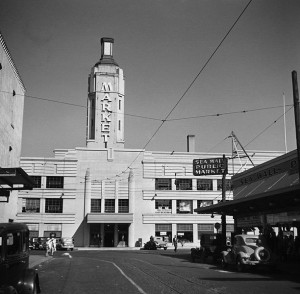 Meet the Producer: Public Markets and Progressives in Portland and Seattle is the topic of the latest History Pub at the Kennedy School (5736 NE 33rd), on Monday, September 24, 2012.

Public markets, where consumers buy food directly from farmers, blossomed in the early 20th century, and both Seattle and Portland embraced them. They were touted for lowering food costs, increasing growers’ income, improving freshness, and contributing to public health. While Seattle’s Pike Place Market still thrives today, Portland’s Public Market died in 1942. Why the different outcomes, and is a rebirth in the offing?

The presenter is Richard H. Engeman, a Pacific Northwest archivist and historian. He is the author of The Oregon Companion: An Historical Gazetteer of the Useful, the Curious, and the Arcane; and Eating It Up in Eden: the Oregon Century Farm & Ranch Cookbook..

The show begins at 7 p.m., entrance is free, and this event is all ages.