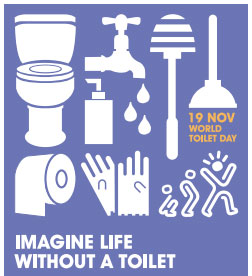 World Toilet Day 2012 is an annual celebration of the importance of sanitation, designed to raise global awareness of the struggle 2.6 billion face every day without access to proper, clean sanitation. It takes place today, Monday, November 19. Activities are planned throughout the world.

In 2010 Portland’s celebration included the Portland Loo unveiling, and though this year’s celebration is perhaps less exciting, it is no less important. Public Hygiene Lets Us Stay Human (PHLUSH), Portland, Oregon’s public restroom advocates, recognizing that Portland’s location in the Cascadia Subduction Zone puts us in considerable risk of a devastating earthquake in our lifetime, has launched a fall emergency preparedness campaign in conjunction with World Toilet Day:

Portland, Oregon is in the the Cascadia Subduction Zone that Scientific American calls “the biggest seismic hazard in the U.S.” The United States Geologic Survey says that Oregon faces a 37% chance of a magnitude 8.0 or greater earthquake within the next 50 years. So PHLUSH is launching a fall emergency preparedness campaign in conjunction with World Toilet Day, November 19. Through information, public workshops and exhibits, Portlanders will reflect on needs and build simple urine separation bucket toilets. Most Americans’ see urine and feces as “waste” rather than as nutrient-rich resources vital to the planet. Disaster preparedness is an appropriate context for putting people at ease with talking about the issues; simple emergency toilets are both important in themselves and an intermediate step toward ecological sanitation and nutrient-cycling.