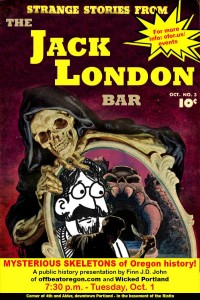 Finn John, author of the Offbeat Oregon column Wicked Portland: The Wild and Lusty Underworld of a Frontier Seaport Town, presents Mysterious Skeletons of Old Oregon: If only these bones could talk … on Tuesday, October 1, 2013 at the Jack London bar (basement of the Rialto, SW 4th and Alder).

What is it about a human skeleton that makes it so different from your run-of-the-mill zombie or vampire? Skeletons are real; they’re dead, but were once alive; they can’t talk, but once could; and their cold and lifeless condition suggests that something dramatic, perhaps tragic, happened to them. If only they could talk ….

Oregon has a few skeleton-related mysteries — mysteries that we could clear right up if only those bones could tell us their story. Unfortunately, they can’t do that. But on the first Tuesday of October, at The Jack, we’ll rattle a few of Oregon’s most mysterious skeletons and maybe roll a few theories around.