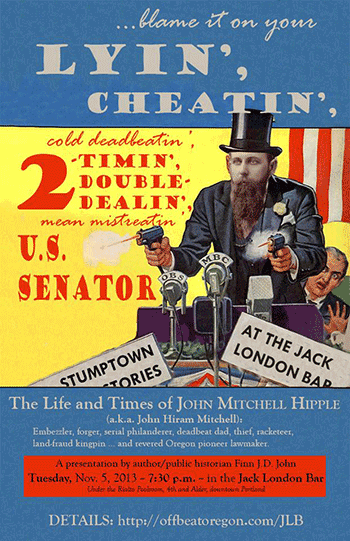 Join Finn John, author of the Offbeat Oregon column and Wicked Portland: The Wild and Lusty Underworld of a Frontier Seaport Town, tonight at the Jack London bar (basement of the Rialto, SW 4th and Alder) as he presents Embezzler, philanderer, racketeer, Senator: The life and times of John Mitchell Hipple, a.k.a. Senator John Hiram Mitchell

And you thought Ted Cruz was sleazy? Hey, Tailgunner Ted has nothing on Oregon’s most influential 19th-century U.S. Senator — who is, by the way, the only one to have ever served in the Senate under an a.k.a. He took the alias to duck the law after he stole $4,000 from his employer in Connecticut and fled to California with his mistress, leaving his wife and children penniless.