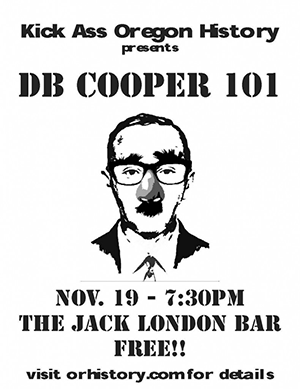 Get the Straight Shit on the only unsolved skyjacking in US aviation history at “DB Cooper 101″ … The Resident Historian will give you the who, what, where, when and how (maybe not the why . . .), and discuss some of the leading suspects in the case. In addition, we will watch a little film about 727s and some of the strange things they did over “Indochina” in the late 1960s, and maybe some other, as yet to be unnamed, film too! It will be a night for those who ask “Who is this DB Cooper guy?” to the self styled Cooper Sleuth, who knows most of the details by now (This is a pretty complicated case, Maude. You know, a lotta ins, lotta outs, lotta what-have-you’s.). AND we will have a Trivia Contest, with the winner receiving TWO tickets to the Washington State History Museum, which includes admission to their amazing COOPER exhibit! Hmmm . . . let’s see . . . “What drink special will the JLB run that night . . .???” So come on down and join us – you won’t want to miss this one!