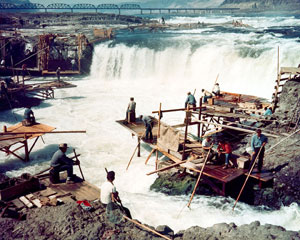 On March 10, 1957, the nation’s oldest and most important Native American fishing grounds were eliminated by the US Army Corps of Engineers. Join Stumptown Stories as we discuss the silencing of the “echo of falling water.”

Presenter JB Fisher will regale us with the story of Alzamon Ira Lucas, a psychic, healer, and psychologist in early 20th-century Portland who reappeared in the 1950s as Chief Rising Sun and single-handedly spearheaded an effort to save Celilo Falls from the dam. Heather Arndt Anderson will share her research on the foodways of the Indians of the mid-Columbia, their salmon-lore, and the way they ate in the City of Roses before Lewis and Clark poked their noses into everything.

The presentation begins at 7:30 PM – admission is free!