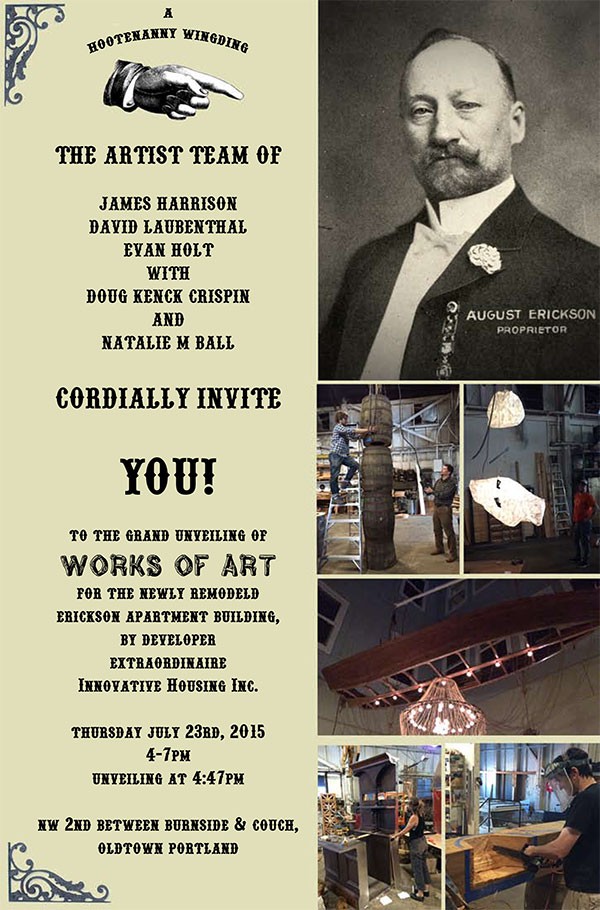 A Hootenany Windig Art Unveiling at Erickson’s Saloon (NW 2nd between Burnside & Couch) takes place on Thursday, 23 July 2015 from 4 PM to 7 PM – with the unveiling at precisely 4:47 PM.

Erickson’s Workingman’s Club, also known as Erickson’s Saloon, was a Portland landmark opened in the 1880’s by August “Gus” Erickson. Taking up most of the block between Burnside/Couch and Second/Third Avenues, Erickson’s was legendary for its 684-foot bar and free smorgasbord lunches with a five cent beer. It boasted five elegant entrances, a grand pipe organ, and 50 bartenders. When the river rose in 1894, Erickson’s served patrons from a barge at NW 2nd and Burnside. Fred Fritz operated several of his own establishments in Old Town, including Fritz’s Theater and Saloon, a grand theater known for its cabaret performances. Fritz was an early investor/partner of August Erickson and eventually took over ownership of Erickson’s in 1907.

After the unveiling and grand opening, IHI will hold its 2015 FriendRaiser from 5 PM to 7 PM – guaranteed to be the best progressive party in Portland this year! Join us as we celebrate IHI’s friends and supporters, the future of two historic buildings, and the vibrancy of present-day Old Town.

The combined event is all ages, free, and open to the public.