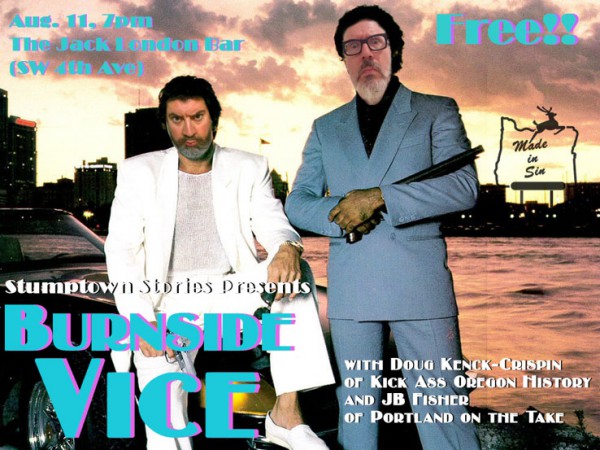 Join Kick Ass Oregon History’s Resident Historian Doug Kenck-Crispin and JB Fisher, co-author of Portland on the Take as they present the next edition of Stumptown Stories Presents: Burnside Vice – 7 PM on Tuesday, August 11, 2015 at Jack London bar (basement of the Rialto, SW 4th and Alder).

JB Fisher will take you on a virtual walking tour of Burnside’s vice-ridden past in the 1940s and 50s. He’ll tell you about the card rooms and taverns, the whorehouses, the bad hotels, and he’ll throw in some juicy stories about the crooked dealings that went down in the district back in the day.

Doug Kenck-Crispin has been working on the public art project in the new Innovative Housing project at the old Erickson’s Saloon building. With the help of others, he has archived more photos (many from private collections) of this storied establishment than have been gathered in at least a generation. He’ll show them ALL to you – many never before publicly presented – as well as photos of the project, and a few “new” stories that he was able to drag up.

Stumptown Stories, batshit crazy stories from the murkiest, weirdest, and nuttiest corners of Portland history, takes place the second Tuesday of every month at Jack London bar (basement of the Rialto, SW 4th and Alder).

Admission is usually (including this month) free. Doors open at 7 PM, 21 an over only.