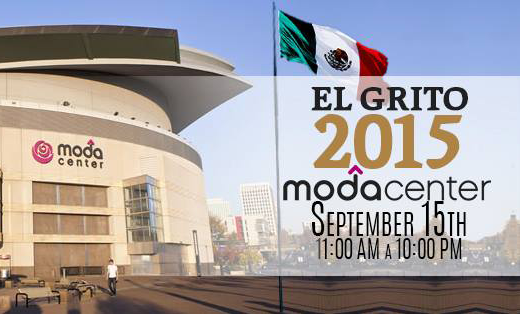 Join the Consul of Mexico and city officials in celebrating Portland’s El Grito y Fiestas Patrias at the Rose Quarter (1 N. Center Court) on Tuesday, September 15 2015 from 11 a.m. until 11 p.m.

El Grito refers to the battle cry of the Mexican War of Independence. The event is remembered and celebrated each year on the night of September 15. Mexican President Enrique Peña Nieto is expected to ring the bells of the National Palace in Mexico City, and give his 2015 version of el Grito from the balcony of the palace to the assembled masses in the Plaza de la Constitución. Throughout Mexico, and parts of the world with Mexican expatriate communities, similar celebrations will take place.

The Portland festival entertainment features ballet folkórico, live mariachi, salsa, cumbia, pop music. Food and beverage and other vendors and booths will be on hand as well. Visit ElGritoNW.com for more details.