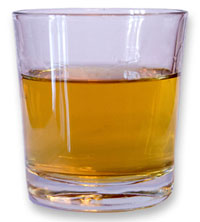 We’re back at it this year with holiday cheer, kittens and mistletoe, and a ton of decorations! We have a bunch of wonderful vendors and will be releasing a special House Spirits White Dog, our 100% malted barley un-aged whiskey, in a convenient 750ml sized bottle.

Heather and I attended this, and the similar Season’s Eatings event at New Deal Distillery, last year and can attest that this is a holiday bazaar you’ll actually enjoy!

Mini cocktails and snacks will be available, as well as booze gift boxes, barware, bitters, mixers and cocktail books. This event is free, but you must be over 21 to attend. It runs from 11am until 5pm. 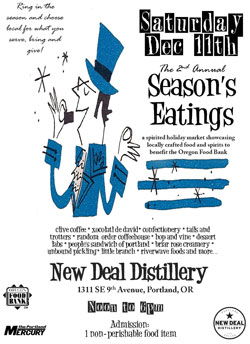 Some of the region’s best chocolates, cheeses, wines, spirits, charcuterie, baked goods, and pasta will be available to sample and to purchase, and it’s all a benefit for the Oregon Food Bank. Admission is free with one non-perishable food item or cash donation.

The Little Red Bike Cafe may be defunct, but Ali and Evan certainly aren’t. Ali will be at Season’s Eatings offering artisan jams and handmade granola under the moniker ‘Little Branch‘. Outside Evan will be manning Lucy’s Original, offering hamburgers and milkshakes! 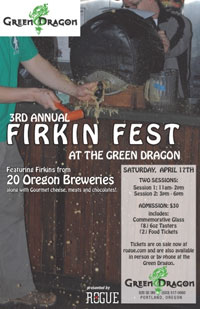 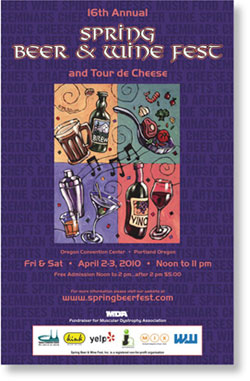 Festival-goers will enjoy samples of more than 80 craft beers, 30 regional wineries and many local artisan spirits, plus delectable tastes of specialty cheese and handcrafted chocolate, all while mingling with brewers, winemakers and other craftspeople. In addition, the festival will also offer a global shopping marketplace, cooking demonstrations and educational seminars on the Chef’s Stage, and live music featuring Northwest bands including Keegan Smith & the Fam.

This is perhaps the only regularly occurring local beer festival that I have not ever visited . . . and dangit, I’m going to miss it again this year (I’ll be out of town). Maybe next year! Some of the stuff I’ll be missing:

There are about a million vendors (okay maybe I exaggerate a bit – but there are a lot), beer and wine competitions, a Tour de Cheese and Chocolatiers, and live music.

Both days the fest runs from noon-11pm. Admission is free the first two hours each day, but $5 after 2pm. For $20 you get a tasting glass or plastic beer mug and 10 tokens (standard $1 each for extras). Kids are welcome, with accompanying adults of course, until 7pm (under 12 get in free).

January comes to an end. Though it’s felt almost spring-like a few days this month, we still have a couple more months of rain and 40 degrees (sorry if this disturbs you but I speak the truth!). So, we make the best of it. The best of it this weekend involves two of my favorite things: pinball and chocolate . . .

Chocolate Fest returns to the World Forestry Center (4033 SW Canyon Road) again this year, and even football fans can make it because it won’t be held on Superbowl Weekend (like last year). [more]

Pinball is one of my favorite participatory sports (juggling would be the other), so the upcoming Pinball Pedal is one of the first bicycle tours to interest me. Though not as ironic as the Tweed Ride which occurs the same day, bikes, beer, and pinball make for a quintessential Portland-style event. [more]