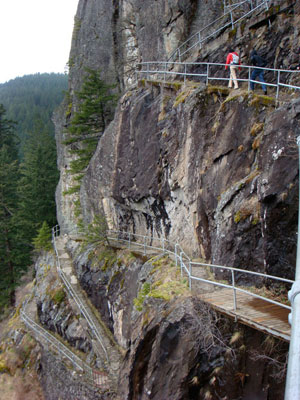 Exciting things are afoot at Hall of Records (3342 SE Belmont).

That’s right, they have an address!

Our friends Katie and Justin have been working to build their dream for a couple years now.

About a year ago they threw a record sale and dj party at It’s a Beautiful Pizza on SE Belmont. Little did they know (though they had an inkling) that a year later they’d sign a lease and get their own set of keys to that very same building, and would begin tearing out the carpet and taping out a location for the bar.

Their adventure has been a little like climbing Beacon Rock, which we climbed with them last March.

(That’s them to the right, on one of about a zillion non-metaphorical steep switchbacks.)

It’s a long way to the top, but they’re almost there. Go read about their adventures building their record store, coffeehouse & bar dream at the Hall of Records blog, and make sure to also visit Justin’s Dusty Nuggets for soulfunkjazz world/breaks 45s and random heat, and an idea of what to expect in the music department at a brick and mortar Hall of Records, coming soon to 3342 SE Belmont in Beautiful Portland, Oregon.