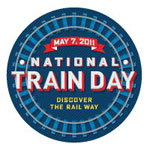 National Train Day marks 142 years of connecting travelers coast to coast and commemorates the day the first transcontinental railroad was created. On May 10, 1869, in Promontory Summit, Utah, the “golden spike” was driven into the final tie that joined 1,776 miles of the Central Pacific and Union Pacific railways, transforming America by creating the nation’s transcontinental railroad.

The Rose Festival Character Clown Corp and train artist J. Craig Thorpe will be in attendance, along with representatives of organizations dedicated to trains, railroad history, and more. Giveaways will occur all day, including a Grand Prize trip to Vancouver, BC on the Amtrak Cascades with two night stay at the Westin Grand and $125 credit to use on attractions, courtesy of Tourism Vancouver.

The star attraction again this year is the 110 foot long, 10 foot wide, and 16 foot tall SP 4449. One of three locomotives owned by the city of Portland, the 4449 weighs 433 tons and can reach speeds over 100 mph with its 5,500 horsepower engine. In the 1940s and 50s it pulled the Southern Pacific Coast Daylight coaches from LA to Portland. In 1958 it was put on display at Oaks Park, but was restored in 1974 so that it could pull the 1975-1976 Bicentennial Freedom Train. (Visit the Oregon Rail Heritage Foundation website for more information about the other locomotives and learn about the foundation’s efforts to build a permanent home for these historical locomotives and other rolling stock.)