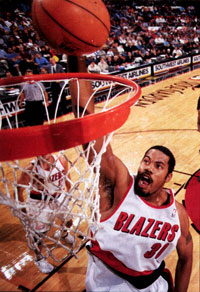 NBA referee Tim Donaghy is being investigated by the FBI for betting on NBA basketball games that he officiated. I never liked that guy. Donaghy is the referee with whom Rasheed Wallace had the infamous confrontation on the loading dock after a game at the Rose Garden in 2003.

I always thought Rasheed got a raw deal when he was suspended 7 games without pay for allegedly threatening Donaghy. Over his playing years in Portland I got the impression Rasheed wasn’t so much a hot head as he was a man who would not tolerate injustice. In general an admirable quality, but in the realm of pro-sports – not always helpful. Referees, as we well know, aren’t perfect. And NBA referees, in particular, hold obvious grudges and pick favorites, perhaps at the behest of the Head Office, and, apparently, at the behest of the mob.