When we last left off, Heather and I were in Elko, Nevada visiting my brother and his family. On the return trip we decided to make a stop at Oregon’s only National Park, Crater Lake, which neither of us had ever visited. 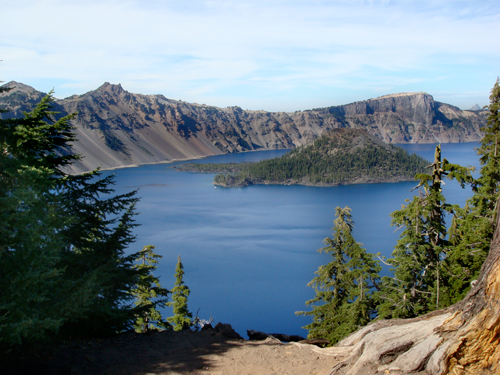 We arrived early enough to secure a camp site at the Lost Creek Campground, the more rustic (i.e. no RVs) of the two campgrounds within the park boundaries. Our original plan was to spend two nights there but the bugs were the worst we’ve experienced in the past two summers of camping, the sites were small and close together and surrounded by dead or dying pine trees, and both of us were due for a shower. So we changed our plans. We would spend one night, explore the park, then hit the road.

But we had enough time to do the rim drive with frequent stops, have lunch at the lodge, and make a reservation at the Old St. Francis School hotel in Bend.

Neither Heather nor I are interested in rigorous hikes, so we stuck mainly to the road, with our longest trip on foot the 1 mile saunter along the Pinnacles trail. We stopped at countless awe inspiring vistas, which were particularly beautiful in the morning sun.

As usual, Heather has blogged the hell out of our visit to Crater Lake at Mile73.com!