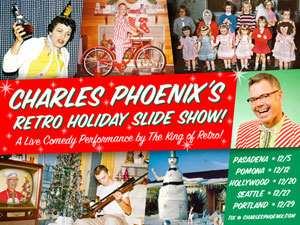 I had the privilege last year of attending Charles Phoenix’s celebration of atomic living at the Clinton Street Theater, where he presented a live comedy slide show performance celebrating 50s and 60s, theme parks, space age style, car culture, roadside attractions and more! He even had a special presentation about Oregon’s own Enchanted Forest, with creator Roger Tofte, and family, in attendance.

He returned in December last year for another, holiday themed, show, but alas – I missed it.

So I was excited to see that Charles Phoenix is bringing his Retro Holiday Slide Show to Portland once again this year. From an email I received from the Portland’s Mid-Century Modern League:

After a sell-out performance in October 2008, Pop Culture Humorist and Author Charles Phoenix brings his live Holiday slide show performance to The Hollywood Theater one night only, December 29th. This laugh-out-loud celebration of Mid-century Holiday style is being presented by The Mid Century Modern League.

Charles Phoenix super-charges the classic living room slide show by reinventing it into a hip and high octane celebration of classic and kitschy Mid-century American life and style. His informed and often hilarious narration of the very best of his massive collection of flea-market found Kodachrome slides will inspire your imagination and make your spirit soar!

In this hilarious Holiday show you’ll see how Americans decorated, dressed up, dined, and drank to celebrate- New Years, Easter, 4th of July, Halloween, Thanksgiving and Christmas in the 50s and 60s.

Audiences from coast to coast are delighted by Charles’ stylish suits, friendly personality and infectious enthusiasm as he puts his unique spin on kitschy and classic American holidays in “Charles Phoenix’s Retro Holiday Slide Show”.

(Alas, I’m going to miss this show too because I’ll be in Los Angeles – but I’m going to Disneyland, so it’s kinda a wash, no?)