Sunday afternoon the weather improved for a few hours, and Heather and I made our way to Oaks Park for the 2010 Multnomah County Fair.

Unlike the Elko County fair we visited last summer, the Multnomah County Fair features hardly any cowboys or cattle, and no rodeo or horse racing. 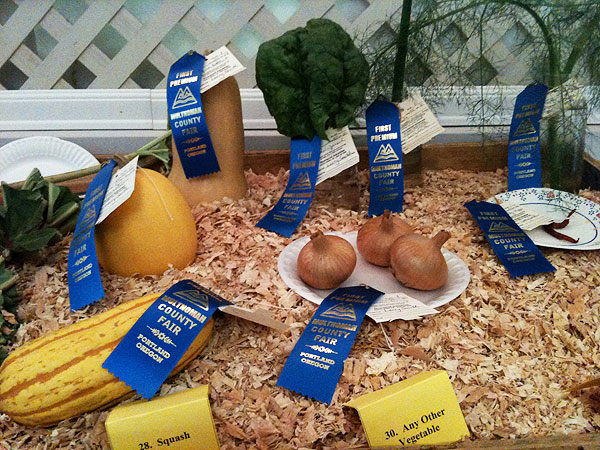 The enormous carrots below, however, were my favorites. They were very deserving of the blue ribbon. 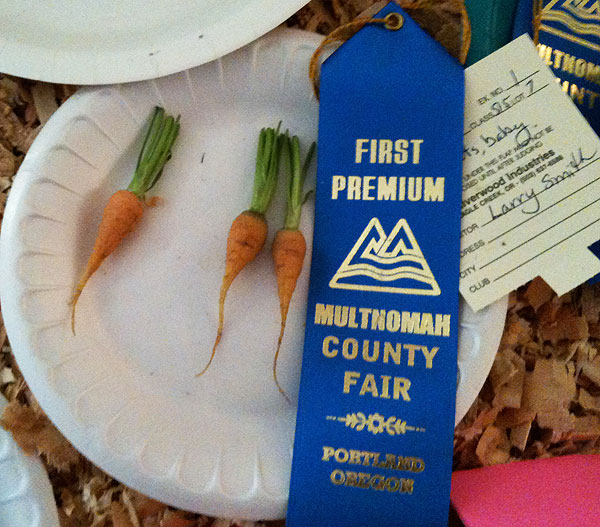 And check out this amazing flower arrangement – it’s called Kicking Up Your Heels: 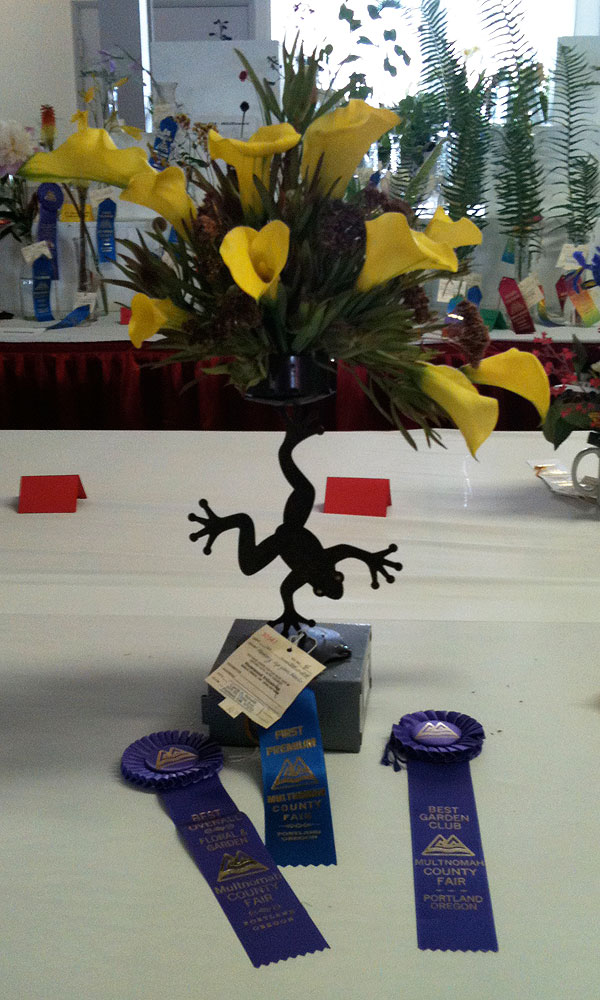 The Multnomah County Fair has a few things that the Elko County Fair doesn’t, though, including the Northwest Challenge X-treme Air Dogs Jumping Competition!

Dog jumps into the water from Dave Knows on Vimeo. 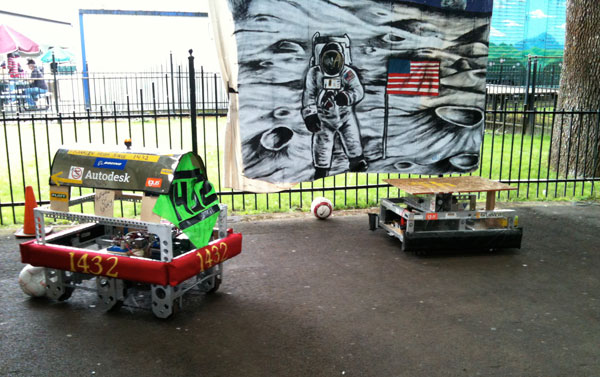 And chainsaw sculptoring! Heather would not let me get this awesome bench for our living room 🙁 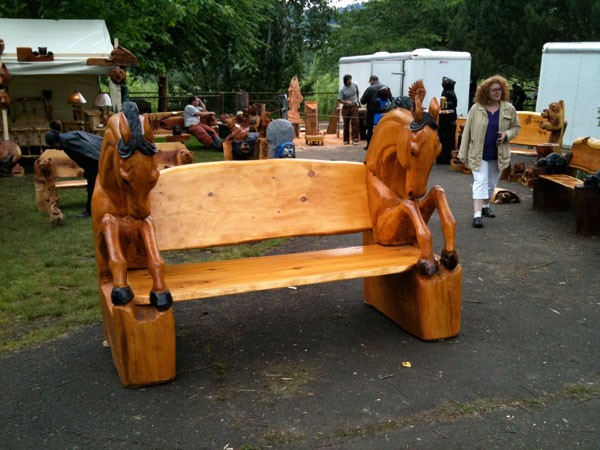 Here are the sculptors in action:

Chainsaw Sculpting at the 2010 Multnomah County Fair from Dave Knows on Vimeo.

Really though, the main draw for us was the animal exhibits, and the fair delivered.

This guy was in the Walk on the Wildside exhibit. He’s a black and white something or other: 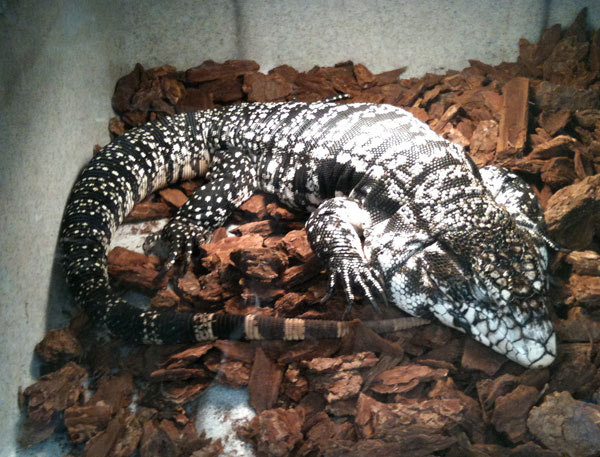 I am 38 years old and I only learned the origin of the phrase “pig pile” yesterday: 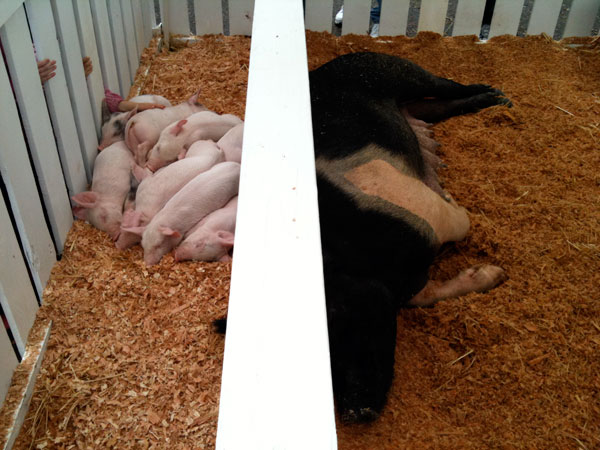 The ponies all looked bored. Why don’t we say “bored as a pony”? 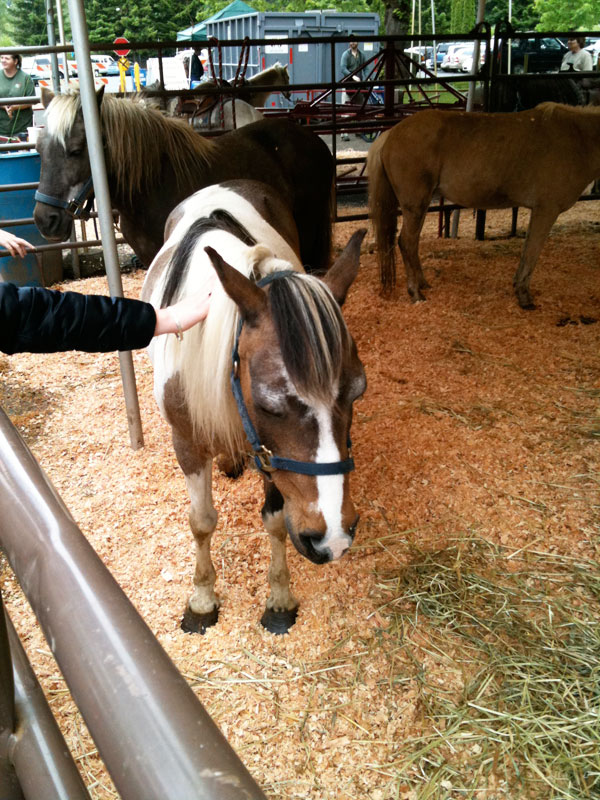 Nigel the Camel had a lot of energy: 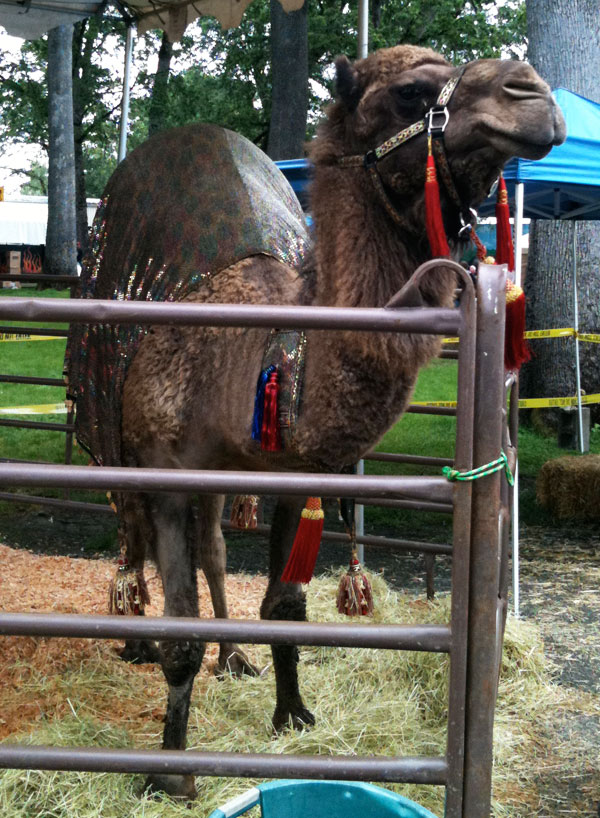 And my favorite part of the entire 2010 Multnomah County Fair? The cute bunny! 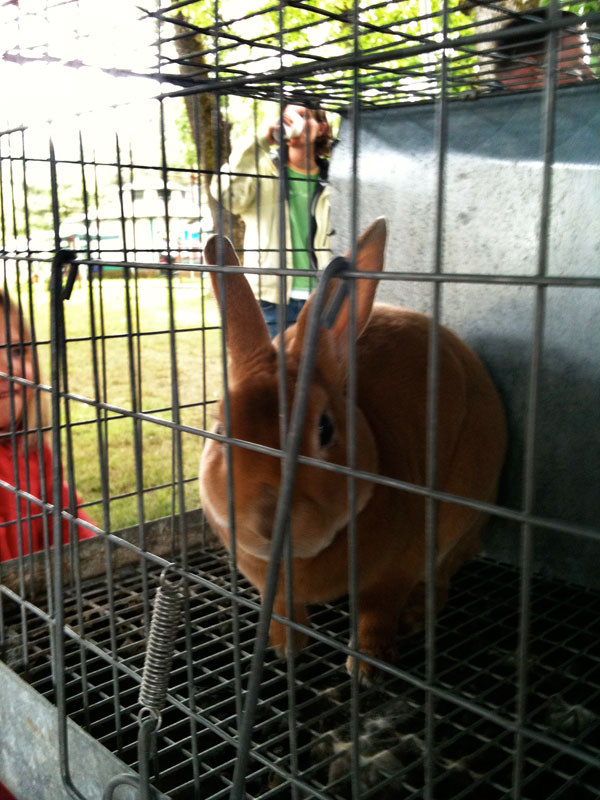 Go read Heather’s view of the fair – Multnomah County Fair: Bunnies – We had such a great time, we needed two blog posts to describe it all! 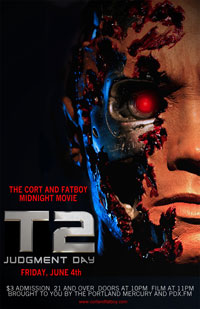 To a lot of us, First Thursday means avoid the Pearl District. But what if instead of a possible glass of wine and some grapes and cheese at stodgy art galleries, you could get a specialty cocktails at a multitude of bars? Wouldn’t that make First Thursday fun? We are in luck!

Organized by the Oregon Distiller’s Guild and the Oregon Bartender’s Guild, each participating venue features a specialty cocktail.

The participating venues are:

(Of the fourteen venues participating, two are Downtown, one is in Old Town, and there’s a hotel and a grocery store, so the event should be called the First Thursday Downtown, Old Town, and Pearl District Bar, Grocery Store, and Hotel Crawl, but I won’t nitpick any more than what I just did).

You’ll find a map below (click it to download the full-sized pdf). Visit the Oregon Bartender’s Guild website, or the New Deal Distillery June 2010 events page for more info! 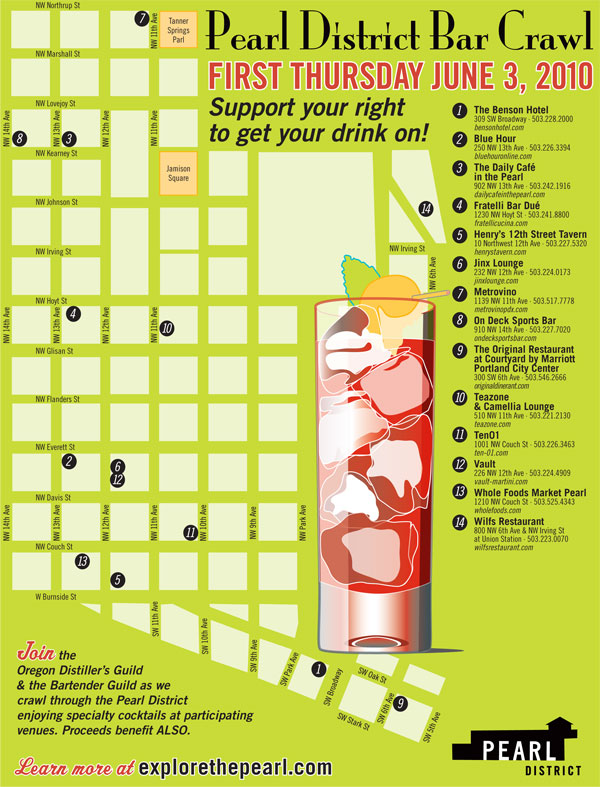 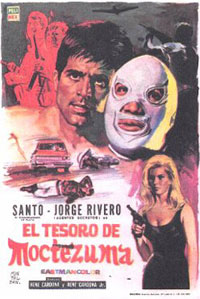 El Tesoro de Moctezuma is the second half of the swinging Santo spy saga that started with Operacion 67. Since it was filmed back to back with Operacion, it boasts the same relatively swank production values and sleek cosmopolitan look. Santo’s pretty boy co-star Jorge Rivero returns here, as does Noe Murayama – who, judging from this and Blue Demon contra Cerebros Infernales, was Mexican cinema’s go-to guy of 1966 for maniacal. The criminal gang from the first film are also back this time around and, in combating them, the secret agent team of Santo and Rivero are commendably more proactive, not just taking the “let’s hunker down and wait for them to start trying to kill us” tack that they did in the first film. Like Blue Demon’s adventures from the same period (and seemingly every action/adventure movie made in any country in 1966), Moctezuma is as much influenced by the cartoonish campiness of the Batman TV series as it is by the Bond films.

The rain may clear out by the 7pm kickoff of the friendly today between the Portland Timbers and Club Atlético Boca Juniors. Boca are one of the biggest clubs to ever grace the pitch at PGE Park. With the way the Timbers have been playing lately, it will be nice to not have to worry about the resul. I’ll just enjoy the atmosphere and, hopefully, wide open play on the field.

Boca Juniors thirsty for a win as they complete U.S. tour in Portland by Geoffrey C. Arnold at The Oregonian