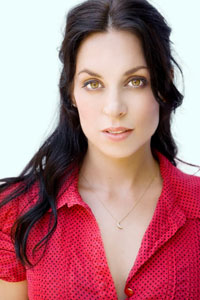 Author and performer Jillian Lauren has lived quite the life.

At eighteen, Jillian Lauren was an NYU theater school dropout with a tip about an upcoming audition. The “casting director” told her that a rich businessman in Singapore would pay pretty American girls $20,000 if they stayed for two weeks to spice up his parties. Soon, Jillian found herself on a plane to Borneo, where she would spend the next eighteen months in the harem of Prince Jefri Bolkiah, youngest brother of the Sultan of Brunei. Leaving behind her gritty East Village apartment for an opulent palace where she walked on rugs laced with gold, Jillian traded her band of artist friends for a coterie of backstabbing beauties.

Her memoir, Some Girls: My Life in a Harem, was published in April, and she is currently on the book tour. One of her stops is in Portland, Oregon, where she will be telling her story at the May 19th Back Fence PDX, and appearing at Powells on Thursday, the 20th to read from her book. She has also written a novel, Pretty, that will be released next spring. Her writing has appeared in Vanity Fair, Flaunt Magazine, Pindeldyboz Magazine, Opium Magazine, Society, and in the anthologies Pale House: A Collective and My First Time: A Collection of First Punk Show Stories, among others. She is married to Scott Shriner, bass guitarist for the band Weezer. They live with their son in Los Angeles.

Recently Heather and I had the privilege of interviewing her for Dave Know Portland, in anticipation of her Portland, and Back Fence PDX visit.

At the Back Fence PDX event do you know what story you’ll be telling, or will you wing it? Or will you share several stories? Do you know there are fantastic cupcakes [from Saint Cupcake!] handed out at intermission?

Live storytelling is new to me, so I’ll have something planned! But it will be something outside of the content of the book – kind of like the director’s cut. I didn’t know about the cupcakes, but I’m a cupcake fanatic. So that’s a real bonus.

Would you consider Some Girls an adventure story? A moralistic tale? Something else?

It’s a literary coming-of-age memoir. I think the word “harem” throws people off and they think it’s a romance novel or a cautionary tale. It’s neither of those things. I’ve had people ask me what the message of the book is, and I don’t have an answer for that. I did my best to tell an honest story and the message is really up to the reader.

Have you been to Portland before? Will you get to spend much time in Portland? (Powells Books, where you are scheduled to read the night after Back Fence PDX, is Portland’s Eiffel Tower!)

I’ve been to Portland many times and I adore it. My closest friend from LA moved to Portland a few years ago and I was pissed at her until I realized that it means I get to visit fairly often. I’ll be staying with her in her new house. I think I might be sleeping on a few boxes pushed together.

What was the most significant thing you learned about yourself in your 18 months in the harem? You entered as a teenager, did you age more than a year and a half in that time?

The real lessons for me were learned as I looked back and reflected. I was able to discover a different level of compassion for both myself and for the other people who shared my story. I looked at pictures of myself from that time and I said, What was so wrong with me? Why did I hate myself so much? I was beautiful. I was hopeful. I was brave. I was adorable. I can see it now clear as day, but I couldn’t see it then. The story is about struggling to love yourself and learning to forgive yourself.

Your life now is hardly conventional, you’re married to a rock star, you’ve adopted a child from Ethiopia, you’ve written a memoir, and now you are on a book tour. Was this the sort of life you wished for or expected growing up?

Actually, my life is pretty boring now, and I mean that in the best way. I write; I take care of my family; I go to yoga. It was precisely this stability that allowed me to write about some of the darker times in my life. In some ways I’ve gotten everything I dreamed of, it just hasn’t taken the form I thought it would. I always yearned for extraordinary experiences and wild adventures. I think it was partially that craving for extremes that led me into my unwise endeavors. So leading a normal life is never what I pictured, but I did finally get the sense of fulfillment that eluded me when my life was wilder.

I’m partial to “Good Life,” but my son singing along with “Island in the Sun” is about the cutest thing I’ve ever seen in my life. He’s totally obsessed with Weezer.

Visit Jillian Lauren’s website, JillianLauren.com, for more information about her writings and book tour. If you’re curious about the book, I recommend Melissa Lion’s review of Some Girls. And you can follow along on Jillian Lauren’s book tour adventures on her blog.