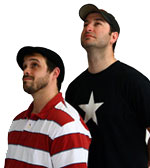 On the Cort and Fatboy show today, June 9th at 10am, there will be a major announcement regarding the future of Portland Media. [Wow, this better be good!] Listen at www.pdx.fm.

Portland Media is a vastly different landscape than it was 5 years ago. Editors, columnists, talkers, hosts, constantly shuffled in and escorted out of the public eye. Very few of these people make the sort of impact their employers hope for. The kind of impact that keeps an audience loyal, keeps the people tuned in, keeps those eyes reading and watching. And even when these minor miracles of media success do occur, there’s no guarantee they’ll be around long – or if they’re dismissed, that they’ll ever return.

Wed. June 9th, pdx.fm’s Cort and Fatboy will play host to a pair of beloved media veterans, well-respected by both their audience and their peers, as they reveal the next step in their careers, live at 10am. This isn’t like Daniel Baldwin flying into town, twitters-a-blazin, hosting a sketchy awards show and then signing on to star in “Stripperland.” This isn’t Ron Jeremy rolling into town to preside over a buffet at a sex club. These guests are people that Oregonians care about a great deal, and their announcement should shoot down a lot of preconceptions of what local media is about and how the game can successfully be played.

My hope is that the announcement involves free unicorn shirts for everyone!