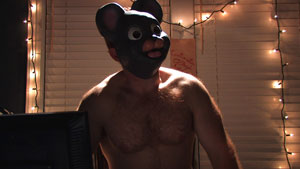 Filmmaker, and friend of the blog, Mike Vogel is finishing up work on his latest film, Did You Kiss Anyone?, a romantic comedy about marriage, sex, and shi**ing with the door open.

Almost one year to the day since we began filming “Did You Kiss Anyone?” we will shoot the second-to-last scene. I try to say this with as much confidence as I can given that we’ve re-scheduled this scene probably close to 7 times.

It’s a pretty weird scene in some ways, involving as many people as we can get to strip down to their underwear (or as close as they feel comfortable) and put on an animal mask. With it being so close to Halloween, I’m hoping people feel a little adventurous. Also, this is Portland, so there’s a solid chance our problem will be too many people.

Heather and I have had the honor of visiting the set a couple times during the filming – once as tourists, and once as extras. We can assure you Mike, his crew, and Portland’s top actors are fun to work with!

Are you brave enough to lend a hand? You’ll get to go to the wrap party! Go read the FAQ for more information, and visit the Facebook page to sign up!