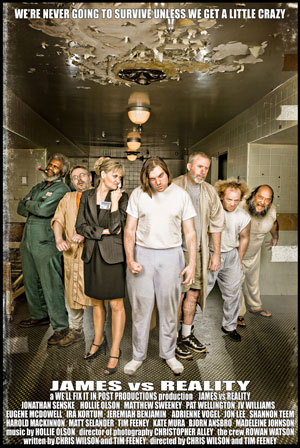 James vs Reality, the story of a chronic escapee mental patient who just happens to think he is a super hero, premieres November 9 2010 at the Bagdad Theater (3702 SE Hawthorne).

The entire night will be filled with fun, spectacle and crazyness, a guaranteed great time! It’s 100% free, although any donations we receive will go directly to festival submissions. DVDs, packed with hours of bonus material, will also be for sale at the event. After the film, we’ll be having an after party right at the theater!

Come out and enjoy the most epic short ever! Packed with comedy, action, explosions, romance and quite a few (very big) surprises! Please bring extra underwear.

This event is not to be missed!

Local filmmaker and 3D animator Chris Wilson produced, wrote and directed, along with Tim Feeney, this visual effect packed funny short film. Recently Chris generously agreed to talk about James vs Reality, his other projects, and filmmaking in Portland with Dave Knows Portland – read the interview, and show up Tuesday night – show starts at 8:30pm.