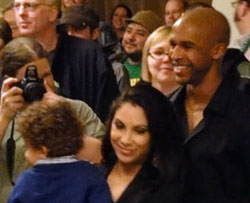 Portland Timbers defender Scot Thompson announced his retirement from professional soccer last night at a special event held at Kell’s Irish Pub in Portland. Scott played for the Timbers from 2004 through 2010, racking up 156 regular-season matches and 12,994 minutes on the field.

Team president and owner Merritt Paulson, joined by technical director and former coach and player Gavin Wilkinson each spoke to the gathered fans, players, and media; praising Scot’s history of hard work, dedication to the team and organization, and his impressive pace on the pitch. They presented Scot with a framed jersey and Scot spoke briefly about how much he’s enjoyed the past seven years as a Timber and finding himself part of the community.

Thank you Portland Timbers for hosting this fantastic event, and for the free beer! I enjoyed a few Guinnesses as I snapped the photos below.