There’s a lot going on this weekend, so choose wisely. In addition to the events featured below some ongoing options include visiting the Pittock Mansion for A Northwest Christmas: The Natural Beauty and Bounty of Oregon, and the zoo for Zoolights. Also this is a good time to visit the Architectural Heritage Center, which is offering free admission throughout December. My plan is the hit up the Ale Festival on Friday, the ScanFair and Zoolights on Saturday, and then glide through Sunday with no obligations.

Stay warm and dry and claustrophobic under the big tent. Take the Max or bus home after you enjoy too many beers with too high an alcohol content and too much cinnamon, cloves, and nutmeg. [more]

Come on out to the Bitter End Pub (1981 W Burnside) on Thursday, December 2 for the Timbers Army First Thursday.

“To put it plainly, holiday shopping is a drag. The lines, the endless quest for parking, the untold sums from your wallet…if only you had a place to go to, where you see happy smiling faces, there are drinks all around, and endless discussions about MLS 2011.” [more]

All Aboard the Holiday Express

The Oregon Pacific Railroad operated trains depart Oaks Park Station for a 40 minute ride along the river. I don’t know how he finds the time, but Santa Claus will make an appearance on each train. [more]

National Geographic is holding a Warehouse Sale at the Convention Center (777 NE MLK Jr.) on Friday, December 3 through Sunday December 5. . . .

Books are discounted 20-90%, and custom prints, and educational materials will also be available. [more]

For this very special Midnight Movie event, the doors of the Bagdad open early. At 8:30pm Cort and Fatboy present Faces of Meh – Live! At 10:30pm David Walker’s Black Santa’s Revenge will be shown, followed by Scrooged at 11pm. [more]

Come for the Scandinavian food, crafts, and the 55th crowning of Oregon’s Lucia Queen of Light. Stay for the Pickled Herring Eating Contest at noon Saturday. [more]

And for more, visit Around the Sun, Blogging Portland on the Cheap, and PDX Pipeline!

This celebration of Oregon writers is a popular holiday tradition. Dozens of authors will be on hand displaying, autographing, and of course selling their latest works. [more] 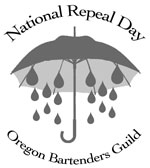 Sunday, December 5 2010 marks the 77th anniversary of Repeal Day, the day in 1933 when three quarters of the states ratified the 21st Amendment to the Constitution and thus repealed the federal prohibition on the sale, manufacture, and consumption of alcoholic beverages!

Every red-blooded American is obligated to toast to our brewers, vintners, distillers, distributors, publicans, bartenders, waitrons, and friends on this anniversary. [more]