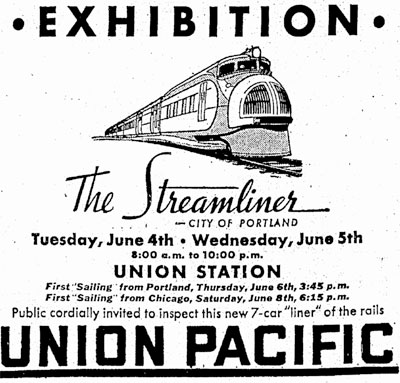 The City of Portland, the last word in modern train equipment, made its inaugural run on June 6, 1935 (Morning Oregonian, 7-June-1935).

A yellow bullet sped on through the rolling hills, plains and mountains of eastern Oregon tonight bent on hanging up the world’s fastest long-distance passenger run.

This hurtling projectile, the last word in modern train equipment, reached Pendleton on time at 7:50 P.M., marking the fasted regular passenger run of record over the Union Pacific’s tracks from Portland.

The streamliner made its first stop here to pick up an entirely new crew of five men. The stop occupied only a few seconds and then the pride of the U. P. resumed its mile-eating journey to Chicago.

The City of Portland operated until the mid-50s.