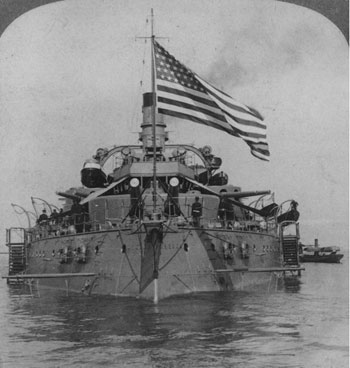 Rose Festival Queen Suzanne I and her princesses were conveyed to Portland to officially open Rose Festival festivities upon the storied battleship USS Oregon on June 15, 1925. The next day’s (Morning Oregonian expounded upon the magnitude of the occasion:

Oregon, old Oregon is yours. A queen brought her to your queen of cities yesterday, brought the once great pride of the navy that it might become the glory of a commonwealth.

Enthroned on the mighty battery turret forward, where once thundered the death knell of an enemy armada, Queen Suzanne rode to her realm of Rosaria.

Never a queen, in truth or fancy, made before such regal entry to her domain. Never a warrior, in truth or fany, on a last peaceful journey was so honored as old Oregon.

Commissioned in 1896, the USS Oregon was a 11,688 ton Indiana class battleship most famous for her service in the Spanish-American War. She was decommissioned in 1919 and loaned to the State of Oregon where she served as a museum ship until World War II, when the war effort required her scrap steel.