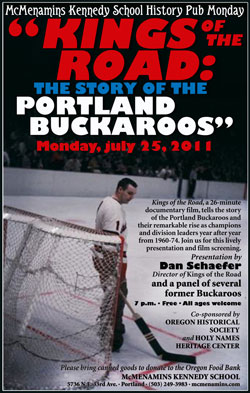 In 1959 the fate of Portland’s hockey team was in doubt. With only a handful of players returning and the press denouncing the team as the worst team ever fielded in the league, all they could do was skate.

Kings of the Road, a 26-minute documentary film, tells the story of the Portland Buckaroos and their remarkable rise as champions and division leaders year after year from 1960-74. Join us for this lively presentation and film screening.

In addition to the film, Dan Schaefer, director of Kings of the Road, will be joined by several former Buckaroos for a panel discussion.

Join event co-sponsors Oregon Historical Society and Holy Names Heritage Center at 7pm Monday for a beer and history! Admission is free and this event is all ages. Please bring canned food donations for the Oregon Food Bank!