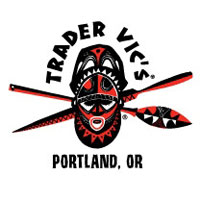 Spending much of the summer in Astoria has its drawbacks – like not being able to attend the Trader Vic’s media event! But friend-of-the-blog Rick (of Beerdrinker.org, and @m8ryx on Twitter fame) gamely stepped into the breach – and provided the review below – thanks Rick!

Trader Vic’s, as you no doubt know, is an upscale chain of Polynesian-themed restaurants – with tiki lounges! Portland’s Benson Hotel sported a Trader Vic’s for about 30 years, but the spot sadly closed in the mid-90s. They’re giving it a go once again, this time in the Pearl District, at 1203 NW Glisan St. (i.e. corner of NW 12th and Glisan).

Tiki is not just a bar. Tiki is a culture. It’s a history and a philosophy. Tiki brings together elements of alchemy and magic to create a feeling of escape. That is what I felt tonight. When I walked through the plywood doors of the almost-finished Trader Vic’s, I was drawn in. The wood finish, the thatch, the umbrella drinks with their wonderful sweet tang, they have a way to relax you, and melt you into the surroundings.

The centerpiece of Trader Vic’s kitchen is a large clay oven fueled by logs of white oak, alder, and cedar. Chef Michael Broderick was kind enough to give me an introduction to some of their dishes and techniques. The oven runs from about 800 degrees at the bottom to 500 at the top and turns out some delicious morsels of meat with a hint of smoke pretty quickly.

The bar is pretty well stocked with a selection of rums that I’ve never heard of. A few of us ganged up on the bar manager and talked him out of a few tastes of some top shelf stuff. The Zaya was great. It was a very sweet, almost tootsie roll caramelization up front, with an amazingly dry finish on the backside.

In addition to straight pours, the bar was kind enough to roll out three standard beverages for our event. The classic Mai Tai (by lore, created by Mr. Vic himself), Nelson’s blood, and a cucumber-infused martini by Heather, somehow related to the modern classic Thatch. Another bit of lore, Nelson’s Blood is named for sea captain Horatio Nelson, who was honored by being put to rest in a rum barrel, then to honor him, the sailors drank the rum that flowed from the cask, inventing the drink and naming it for the great captain.

Located in the heart of the Pearl District at 12th and Glisan, Trader Vic’s is well situated to draw in crowds to its moderately upscale slice of paradise. I’ll probably see you there after the crowds die down a bit, which will probably take awhile.