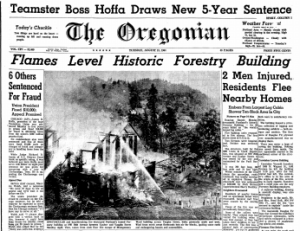 Portland’s historic Forestry Building, billed as the world’s largest log cabin, burned to the ground on August 17, 1964 (The Oregonian, 18 August 1964).

The log cathedral at NW 28th Avenue and Upshur was built for the 1905 Lewis and Clark Exposition, and served as a city owned museum of forestry until that fateful Monday.

Designed by architect Ion Lewis, who also contributed to the designs of Portland City Hall and the Multnomah County Courthouse, the building was constructed with huge unpeeled Douglas Fir tree trunks. It was 206 feet long, 102 feet wide, and 72 feet tall.

After the fire the city donated land at Washington Park for a replacement. The new World Forestry Center opened in 1971.