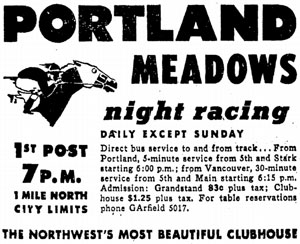 Over 10,000 people attended the grand opening of Portland Meadows on Saturday, September 14, 1946.

The new Portland Meadows presents a mile track that General Manager William P. (Bill) Kyne of Bay Meadows fame in San Francisco categorically avers will be one of the fastest in the world; a luxurious plant built to accomodate 12,500 customers nightly . . . This race meet presents something entirely new in major horse racing: Night races under the lights. . . . There has been night racing before on fairground or other small tracks, but this is the first mile track in racing history to turn to it; success of night racing here would certainly establish a trend elsewhere . . .

General Electric developed the sports floodlights, first application of which was in New York’s Yankee baseball stadium – with improvements since added, making the Portland Meadows, according to G.E., the brightest lighted park in the country. The 584,000 watt system had enough power to light a four-lane superhighway from Portland to Salem.