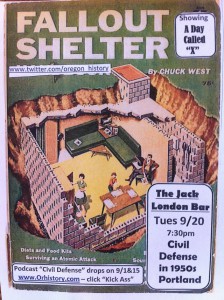 The Stumptown Stories series, geared to everyone who loves this city we live in, takes place most Tuesdays at Jack London Bar (basement of the Rialto, SW 4th and Alder). Free to get in, but must be 21 or over – there’s a full bar!

The latest installment, Civil Defense in 1950s Portland, will be presented by OrHistory.com‘s Doug Kenck-Crispin this Tuesday, September 20, 2011 at 7:30pm.

The presentation features a showing of the film A Day Called X.

In 1957 CBS showed a documentary by Canadian filmmaker Harry Rasky about Civil Defense in PDX. Narrated by actor Glen Ford, if featured, amongst other things a look into Portland’s Doomsday Bunker beneath the soils of Rocky Butte.

For a preview of this week’s topic, listen to the Kick Ass Oregon History Vol 3 #3: Civil Defense Part 2 – A Day Called X!