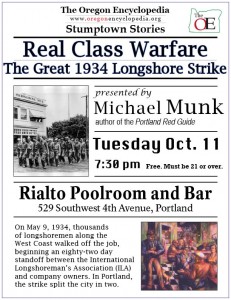 The (very topical) topic of this week’s presentation is Real Class Warfare: The Great 1934 Longshore Strike in Portland.

On May 9, 1934, thousands of longshoremen along the West Coast walked off the job, beginning an eighty-two-day standoff between the International Longshoreman’s Association (ILA) and company owners. In Portland, the strike split the city in two: sympathetic citizens rallied around the workers, offering food, shelter, and transportation; those opposed to the strike—including Henry Corbett, Amedee Smith, and Henry Cabell—formed the Citizens Emergency Committee and called on President Roosevelt to stop the strike with federal troops.

The presenter is Michael Munk, political scientist, local expert on radicalism in Oregon, and author of The Portland Red Guide.