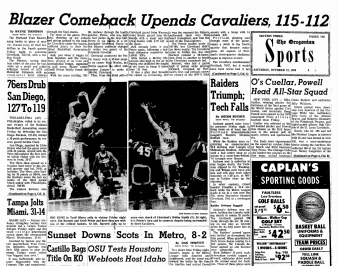 The Portland Trail Blazers debuted at the Memorial Coliseum on Friday, October 16, 1970 (The Oregonian, 17 October 1970). The team treated the 4,273 fans (the Blazers’ 18 year string of consecutive sellouts was still years away) who came out to that first game to an exciting 4th quarter comeback to defeat the Cleveland Cavaliers.

With the team trailing, 102-96, midway through the fourth quarter, [Blazer rookie Geoff] Petrie, who was held to four points in the first half, threw in six points in a remarkable 10-second flurry as the Blazers suddenly charged to within two points of the flustered Cavalier.

Cleveland countered the Petrie frenzy with a 10-foot jumper by center Walt Wesley, but Petrie negated the effort with another jumper to make it 106-104, Cleveland.

Then, from the blind side of Cleveland guard John Warrent, came Blazer guard Stan McKenzie with a steal and the tying basket with 4:07 left in the game.

And seconds later, it was Petrie again, following a brilliant defensive maneuver by LeRoy Ellis.

Ellis batted a McCoy McLemore shot high in the air to Petrie, who dribbled the length of the court to bang it home from 15 feet.

It was a play that brought the crowd up screaming, and it was the moment the Blazers performed their very first heart transplant, and won the soul of the first-nighters.

The final score was 115-112. The Blazers finished the season with 29 wins and 53 losses, a record they would not surpass until the 1974-75 season when rookie Bill Walton joined the team.