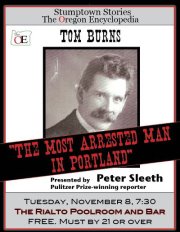 The watch shop and bookery on SW Fourth and Ankeny, just off Burnside in downtown Portland, was a popular gathering place for the city’s more radical residents during the early 20th century. Its proprietor, Tom Burns, held meetings in the basement for his friends and fellow Socialists, reacting against the economic inequalities that plagued the country. Tom Burns walked his talk: he wrote pamphlets, letters, and newspaper articles; held speeches, strikes, and rallies; and was regularly arrested for his efforts, leading to his title: the Most Arrested Man in Portland. Reporter Peter Sleeth, whose family knew Burns, brings insight to this dynamic and largely unremembered Portland radical.