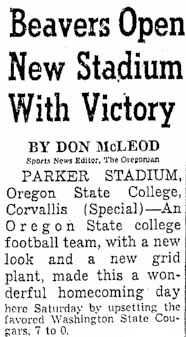 On November 14, 1953 Oregon State College’s eleven faced off against the Washington State Cougars in the first football game ever played at the brand new Parker Stadium in Corvallis (The Sunday Oregonian, 15 November 1953). The Beavers, on homecoming day, upset the favored Cougars 7 to 0.

A touchdown plunge by Chuck Brackett, less than two minutes before the close of the first half, supplied the inspired Beavers with their slender but adequate victory margin and turned 13,500 fans, many of them old grads of this fine school, into screaming, back-slapping maniacs.

For Brackett’s dip into the enemy end zone not only wrapped up the second Coast conference triumph for the Orange this season, but also gave ORC the honor of scoring the first points in this spanking new stadium.

Parker Stadium, known as Reser Stadium since June 14, 1999, was named in honor of Charles T. Parker, class of 1907, the Portland businessman who spearheaded fund-raising for the project and played a role in its construction. Oregon State College became Oregon State University in 1961.