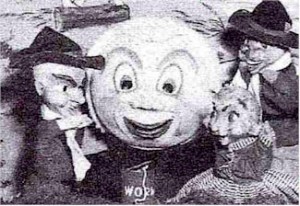 Long before Bumpity, another puppet show ruled the airwaves in Portland: Mr. Moon.

When 4:30 rolls around every Monday through Friday, you would hear Harry the Heron yell, “Come on gang, it’s time for Mr. Moon”. Over 100,000 youngsters in Oregon and Southwest Washington flocked to their TV sets to follow the fabulous adventures of Mr. Moon and his hilarious puppet crew. Beginning as a radio show in the early 1950s, Mr. Moon became one of the most popular kid shows in Portland.

Behind the Mr. Moon mask was longtime radio disc jockey Ed Leahy. He created the cast of characters from the Mother Goose Rhyme “Hey Diddle Diddle”. Another well-known Portland broadcaster, Art Morey, joined the show as the voice of Harry the Heron and other animal characters.

Mr. Moon debuted on November 16, 1953 one month after KOIN TV went on the air, and just over a year after television came to Portland. The show aired until 1958.