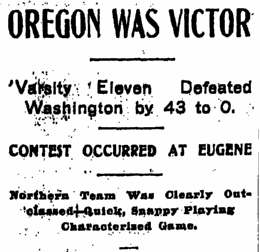 The University of Oregon football team outclassed the visiting eleven from the University of Washington in the first game ever played between the two teams on December 1, 1900 (The Sunday Oregonian, 2 December 1900).

EUGENE, Or., Dec. 1. – All that proud, athletic Washington loved and cherished was taken from it this afternoon and ruefully tramped in the bitter mud of defeat by the husky young pigskin-kickers of the University of Oregon. The score, 43 to 0, stands for a splendid exposition of sport, in which the visitors were clearly outclassed. By powerful line plunges and swift end runs, the Oregon boys were able to score at will, but not once during the whole 60 minutes of play did Washington menace the Webfoot goal.

Washington won the rematch three years later and controls the all time series 57-41-5, but still, in that first game in 1900, one cannot easily forget all that proud, athletic Washington loved and cherished was taken from it . . . and ruefully tramped in the bitter mud of defeat.